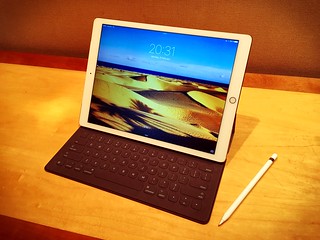 In a recent blog entry I referenced an article Euan Semple published a few days back under the heading ‘Being at work’, which I can strongly recommend re-reading through it, if you haven’t just yet. There were a number of different themes that caught my attention back then and I thought that, perhaps, for today’s article, I’d focus on one of them I didn’t mention the last time around. This one, to quote: ‘Ten years later, having experienced over that time the joy and increased effectiveness of being a freelancer in charge of my own productivity, […]’, although I would have added as well the following tidbit: ‘and computing environment’. Because that’s what freelancers do, right? Always looking for that final productivity hack within their own computing environment that may well take one’s own effectiveness into the next level. Well, I think I may have found my own: The iPad Pro.

According to coconutBattery, my MacBook Air is 1733 days old, even thought it’s still in perfect working order, except for a couple of keyboard keys I can no longer read, as they are too worn out, and a battery half way through its capacity. It still works. Perfectly. It’s been my old time favourite computing device to get work done, even when I was a salaried employee at IBM. What I love the most about this machine is the fact that despite all of the heavy computing and business traveling I have done with it over the years, it still works flawlessly. And I hope it continues to be like that for many moons to come (knocking on wood, as I write these few words down…).

However, a few months back I came to terms with the fact I might need to update my own computing environment for when the MacBook Air is no longer there. And, at the time, I had to question whether I was ready to go mobile only or still rely on a laptop. I was really keen on confirming whether 2016 was the year of mobile or whether it was just another frustrating experience like the one I blogged about nearly 5 years ago. Mind you, for the kind of work I do, you can imagine I don’t require a very powerful machine. So perhaps I was ready to make the jump into #mobilefirst.

Indeed, I was and still am! Back in February this year I decided to jump the shark and purchased an iPad Pro, the 12.9-inch one, with the whole intention of making it my main computing environment for my daily work and take it for a spin to see how things would work out eventually. I could always back out of it and carry on with my MacBook Air till it would break apart and get another laptop, but so far, I can tell you all I am loving it! Next to my iPhone 6S Plus, it’s perhaps the best purchase I have ever done.

I just didn’t buy the iPad Pro alone, by the way. From my user experience with other iPad models in the recent past, I knew I’d need to buy the Smart Keyboard, so I did purchase one. And I also quite fancied getting my hands on the Apple Pencil to see how much creative I could get writing again on a screen. So I got one, too! And, eventually, my new computing environment, that you can see on the above snap shot, was born.

Back in 2011 I put together a blog post under the title ‘My Top 10 Reasons Why I Bought an iPad 2’ and, while re-reading through it, I found it rather amazing to see how little my own needs and wants for a computing device have changed over the course of the years. Yes, iPads have gotten incredibly better in terms of specs and what not, but, if you look into those reasons I shared back then, they were down more to my own behaviours, habits and work practices than anything else. And in 5 years, very few different things have changed, apparently, even though I have moved from being a salaried employee at a large IT corporation like IBM to becoming my own CIO looking after my own productivity and computing environments.

Now, I am not going to go through all of the various different reasons again explaining how the iPad Pro fairs in comparison with the iPad 2, more than anything else, because, like I said, those very same reasons would still stand, and very accurately, for the iPad Pro itself as well. Instead, I will just list them all over here and go ahead and add another 5 more reasons as to why I truly heart such brilliant mobile computing device. So, the initial round of reasons were as follows: Speed, Quality, Design, Cameras, Games, Friends, Price, Early Adopter, The Apps, Mobility. Go ahead and read through the blog post itself from back then for a short explanation for each reason, if you’d want to read some more about them. For now, let’s go and dive into the 5 new reasons…

Now, I realise this may well be a too simplistic blog post on its own to confirm whether you may be enticed to purchase an iPad Pro yourself, or not, but I am seeing this article as an opportunity to put together a series of entries around how I make the most out of my own computing environment, as a freelancer and digital nomad, to perhaps suggest and share further along with you all how it works for me and to demonstrate whether going mobile only with both my iPad Pro and iPhone does eventually make me more effective in the work I do than when I was using a computer / a laptop. So if you’d have any burning questions out there that you would want me to answer sooner rather than later, or share my feedback on, drop me a comment below and I’ll respond as soon as I possibly can, while I get to work on the different blog posts from this series as time goes by.

Finally, one question to open up the floor, if you wouldn’t have to do tons of heavy computing tasks for your day to day job, that would require you to use a powerful desktop or laptop, would you move into mobile only and rely on an iPad Pro? If so, if you have already done it, what’s been your user experience so far? Is 2016, at long last, the year of mobile computing?