After a pretty intensive and eventful weekend, from which things have started to settle in quite a bit already, I thought it would be a good time to reflect on something I witnessed on Sunday morning, local Canary time, which will be rather difficult, if not impossible to forget. Or, at least, I hope not!

This is an entry that doesn’t have anything to do with the topics I get to blog about over here on a regular basis, yet, somehow I feel it touches on some of the key points I am hoping are getting through to folks who may eventually bump into this blog, as regular visitors or casual Web surfers.

As most of you folks know already, over the last few years I have developed quite an avid interest around the fascinating world of tennis, and that mainly because of two main reasons: Rafael Nadal and Roger Federer. Yes, indeed, yesterday morning, Canary time, we witnessed one of those epic battles amongst two titans that surpasses perhaps any rivalry from our current times, at least, in the sports world!

Yesterday was just another proof of it! However, we also saw something else. Something rather unique and compelling that speaks about what these giants are capable of or, better said, made of: feelings. Emotions that would melt everyone even in the toughest situations. Just like you and me, they showed they are also human. Both Roger and Rafa demonstrated that they do have a common passion, a common sense to achieve a very specific goal: be on top and demonstrate their leadership in all courts / fronts!

And that’s just what they both did yesterday! They showed how insanely human their tremendous leadership has been all along and while, I am sure, most of us were sharing a tear or two, they have both won our respect for each of them, and for the game itself. Going to always remember them for that! In case you haven’t seen the finals of the Australian Open, I would strongly encourage you all to catch up with it! It will be worth while your time. I am certain!

Now, can you imagine the corporate world of the 21st century, the one we all feel social software is slowly, but steadily, humanising and shaking itself inside out, behaving in such powerful way? Can you imagine your business re-gaining that human side of things? Those feelings? Those emotions? 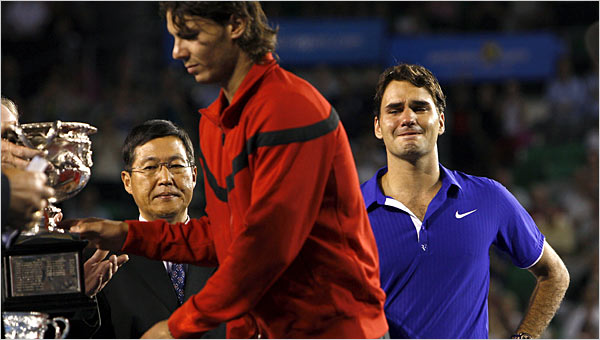 Congratulations, champs! It’s been an amazing thrill watching you and I am already looking forward to the next one! … Whatever the result. You have shown us all it doesn’t matter just as much anymore!

5 thoughts on “On Humanising Titans”